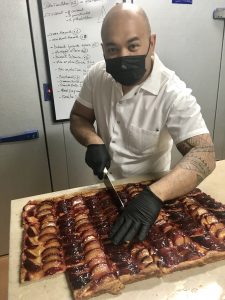 It’s hard to imagine a more spectacular plum tart than the one Sami Baker has just produced.  Many other fresh sweet and savory items are still on trays in a rack ready to go into the small, charming front room of the bakery.  The Epices Bakery shop opens at 8:00am.  By noon, Sami’s business partner Ali Naouai has been selling almost non-stop: croissants and the very popular pain au raisins and sweet cinnamon buns covered with caramel and walnuts, and pistachio cream filled pastries.  Between customers, the two men chat briefly in French.  Ali, originally from Tunis, lived in Montreal before coming to New York in 1992.  Ali and Vera, his American wife, have five children.

After 9-11, Vera went back to school and now works as a Nurse Practitioner at an East Side hospital.  The couple have owned multiple eateries on the UWS.  They are still owners of Muffins Cafe at 222 Columbus Avenue that serves a vast array of muffins, cake slices and other pastries that are all made at Epices located about 100 yards away at 104 West 70th Street.

The concept at Epices is using top quality ingredients in the creation of a great selection of familiar French classic pastries and individual quiches.  “We’re not trying to be famous or award winning, just simple and delicious…a neighborhood place.”

Sami was born in South India.  His farther was Indian and his mother Vietnamese.  They moved to Paris when Sami was six years old.  later, Sami was trained at Fernandi, a prestigious culinary arts school in Paris.  He then worked at some of the elegant Parisian bakeries including Lenôtre and Fauchon.  He works long hours — 4:00am-10pm and is proud that his delicate chocolate and coffee eclairs are just as they would be in Paris.

Sami has worked as a baker and executive chef in Brazil, Portugal, Spain and Angola in Africa.  He came to New York City “for fun” on a vacation two years ago and met Ali.  The two came up with the plan for the bakery that opened in early April 2021.  The welcoming friendliness of the shop and its delicious offerings are drawing adolescent pals; parents or a nanny pushing strollers; joggers after a morning run; the virtual office professionals; retirees and just about everyone else!