Sailing the Seas Via Columbus Avenue 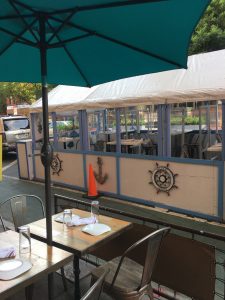 Passing on foot, bike or car Lokal‘s outdoor dining shelter at 83rd Street and Columbus may remind you of a totally different means of conveyance.  Lokal Mediterranean Restaurant co-owner Serhat (Sergio) Cetin credits co-owner Murat Aktas for coming up with the “brilliant idea” of evoking a sailboat excursion or cruise.”  The restaurant’s shelter is brightly painted in white with turquoise trim and with nautical touches artfully placed.

You find yourself right onboard as you sip a chilled white wine and nibble on an assortment of savory mezas like tzatziki, baba ganoush and whipped red caviar.  Extending the pleasure into a larger meal, Sergio suggests you might enjoy a whole fish, perhaps a durado or sea bass. Given that Sergio and Murat are from Turkey, if this were an actual boat trip, it might well be on the Mediterranean, the Sea of Marmara, the Aegean or the Black Sea these bodies of water that touch Turkey’s shores.  The executive chef’s background is also from that part of the world.

Lokal opened in 2017.  The atmosphere is all about openness to the varied influences of the world and the strength of shared positive values.  The upbeat tone that characterizes this eatery reflects the comradery between its business partners.  Lokal, the restaurant’s name, Sergio says, translates in Latin as “a happy place where people gather and socialize.”

Realization of Sergio’s American dream goes back to his high school years in Sunnyside, Queens, where he moved from Istanbul with his family at age 11.  While completing high school, he worked distributing flyer advertisements.  Murat, ten years older than Sergio, owned a local restaurant and hired Sergio as a busboy.  Over the next few years, he progressed from busboy to server to manager.  “I was a busboy, when the dishwasher didn’t show up I was also the dishwasher,” says Sergio happily recalling his route to moving up in the restaurant business.

In 2010, Sergio opened his own restaurant in midtown.  And, seven years later, Murat who by then had been managing another restaurant in midtown, decided to sell.  He suggested to Sergio that they become partners in a new venture.  A mutual friend, Chef Matt Serger joined the partnership.  Sergio has high praise for Chef Matt. “He has a true touch of bringing out the flavor of fresh fish in a way that after having it the first time you’ll come back for this again and again.” The three partners boosted each other’s confidence – Lokal was on its way.

“We have recently celebrated my daughter`s birthday in Lokal (her name is Ela),” says Sergio. “She loved having the chicken tenders at the restaurant and our chocolate gelato for dessert. It was a beautiful sunny day so we sat on the newly built outdoor patio which seats up to 60 people.”