Smashing a cake, a formal sitting with Grandma or stoop-sitting 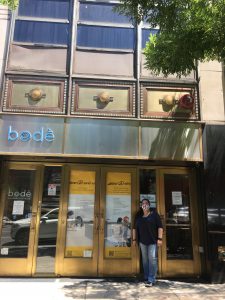 Big Apple Portraits located at 143 West 72nd Street is all about celebrating family.  The studio specializes in a wide variety of family portraits in custom studio settings designed and constructed by principal photographer Harmonie Soyk.  Joyful encompasses the way Harmonie approaches every aspect of the work she loves.  And, her sensitivity to her subjects and imagination is reflected in all her work from relatively serious multi-generational family portraits to “hilarious” cake smashing events that have been popular for at least the past decade.

So, for those who may not be familiar, Cake Smashing is a tradition that happens in connection with a one-year-old’s birthday.  A parent brings a cake to the studio along with their one-year-old.  The studio set is custom-made according to the client’s wishes and may relate to an apartment color scheme or other variable.  Portraits are taken of the child (without the birthday cake) and then, “they have at it,” in terms of the cake smashing part of their studio session. “In the beginning, people used to bring cupcakes,” says Harmonie.  “Now, it’s gotten more elaborate.”

Other photo sessions may be more classic, including irresistible newborn or infant portraits with children wearing little knitted bonnets or surrounded by simple props.  Covid precautions have been very closely followed, even after a four-month period of closure.  Very recently large group photos have been scheduled, including one organized for a grandmother’s 65th birthday.  Harmonie took group photos of the birthday celebrant along with ten family members and then there were separate photos “with grandma and each of her grandchildren.”

Big Apple Portraits is open to following the creative impulses of its clients.  For a maternity photo session, one couple requested a goth theme to join a series the couple commissions from different photographers every year featuring a different theme.  “They weren’t at all goth-type people,” says Harmonie, explaining that added to the fun of the shoot for the couple, their young daughter and the photographer. “The Dad was laughing the whole time.”  Their cat was in the portrait too.  Dogs, cats and even a turtle have been included in other clients’ photo portraits.  “We welcome pets, they are part of the family,” says Harmonie.

Apart from studio photos, photo shoots are also scheduled in “select spots with, especially beautiful trees” in Central Park, which is only a block and a half away from the studio.  These are mostly taken in Spring and Fall.  Currently in the works is identifying a beach location to accommodate photographing families involved in summertime beach activities.

Wintertime has inspired another, popular and imaginative out-of-studio location using the brownstones, stoops and benches of the Upper West Side, sometimes with a glimpse of a passing yellow cab, as the backdrop for portraits that clearly have an urban vibe.  These are sought by both West Siders and Easter Siders, Harmonie says.

Originally from Wisconsin, Harmonie says “I had a camera in my hands from the age of ten.”  She went to art school and then came to New York.  After working in retail management for a number of years, she then was hired more than 10 years ago by photographer Kim Brooks, founder and owner of Big Apple Portraits, originally located on 91st Street and Broadway.  “Interacting with families, creating these moments and memories…I love everything about my job,” says Harmonie.  Creating sets is where her arts training and sense of humor shows up.  Her eye for a good shot comes naturally, honed by experience.