Supportive Services: A Long-Time Priority at the Marseilles 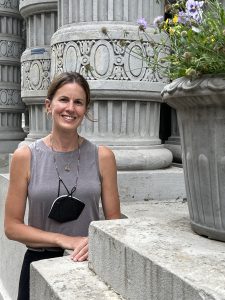 20+ years ago, in the early years when Cara Brussovansky, LMSW, Director of Clinical and Social Services, started working for the West Side Federation for Senior & Supportive Housing (WSFSSH), she was based at the Beaux Arts style Marseilles building at 103rd and Broadway. The Marseilles was WSFSSH’s first project, opening in 1980. Since then, with the support of capital and service funding from New York City, New York State, and the private sector, WSFSSH has expanded its portfolio to include 30+ buildings offering a variety of safe and affordable housing options and supportive services for low-income seniors and those living with mental illness and substance abuse disorder throughout Manhattan and the Bronx. There is a long waiting list to live in the Marseilles. The building has 134 independent apartments, consisting of one-bedroom and studio units.

The building has a remarkable past as a stunning residential hotel that hosted diplomats and foreign dignitaries in the early 1900s. By the late 1970s, the neighborhood was in shambles and the building was empty.  Apart from a rather grand – high-ceilinged community mezzanine with tall windows, there was hardly a trace of its history as a grand hotel and later as a refuge for people displaced by war.

The timing was right for WSFSSH. Here is where a new type of supportive housing program was established that would set a standard adopted elsewhere. The key distinction of WSFSSH’s supportive housing model was the integration of compassionate property management with onsite social services. WSFSSH’s mission is to provide safe and affordable housing that supports the dignity of each individual and enhances community both inside and outside our buildings. WSFSSH is committed to having a team of on-site social workers to assist residents with any issues as they navigate daily life. “The idea is to support their independence in safe, affordable housing,” says Cara. Today, the building is staffed by a team of about 15 people including two onsite social workers, and a 24-hour security guard.

“COVID hit the building very hard,” says Cara. “There were many deaths among the oldest and frailest folks.” However, she is proud to say that, “WSFSSH was at the forefront in helping our population of high-risk residents have early and easy access to vaccines. Through our partnerships with many city agencies, we were able to vaccinate as many as 80-90 percent of Marseilles residents, home care workers, and staff from January 2021 through April 2022 at our onsite vaccine clinics.” Throughout the pandemic, WSFSSH continued to promote the well-being of our communities by hosting onsite COVID testing clinics at all of their supportive housing sites, including the Marseilles.

Because of social distancing requirements, in-person activities and meetings with social workers had to be adjusted—workers made regular phone calls and door-to-door wellness visits to all residents. Social workers helped residents participate in telehealth visits with medical providers – a challenge for many residents who were not familiar with virtual technology. Marseilles staff delivered monthly food pantry boxes from Food Bank of NY and shelf-stable meals from Meals on Wheels. Throughout the pandemic, the provision of inexpensive meals for those who could not prepare food in their apartments continued but was limited to pick-up rather than congregate dining. More recently, Thanksgiving and holiday events have resumed as have a variety of recreational activities including Bingo.

What supportive services are most in demand? Cara says social workers at the Marseilles regularly help residents to obtain and maintain entitlements and Medicaid, and assist those who need assistance with accessing home care. Some residents need help obtaining food stamps, scheduling clinical appointments, and arranging for transportation. “We work with families as well.”

An important goal of our supportive services is respecting a resident’s self-determination while ensuring they remain safely and independently housed; a lot of thoughtful work is involved in supporting and respecting a resident’s independence. Part of that independence is afforded through accessibility. Architect Frederick A. Bland, FAIA, AICP, is a Partner Emeritus of the prestigious Beyer Blinder Belle Architects & Planners LLP. He has worked for 50 years at this firm known for restoring and renovating historic buildings and many other projects all over the world.  Also, he currently serves as Vice Chairman of the Landmarks Preservation Commission.  early in his career, he was the lead architect when BBB renovated the Marseilles in 1980.  It’s been a long time, but he distinctly recalls that a key challenge was making the building “fully accessible for elderly, handicapped or disabled residents.” Also, he says his team was keenly aware of the building’s beauty and they were attentive to preserving its integrity wherever possible.