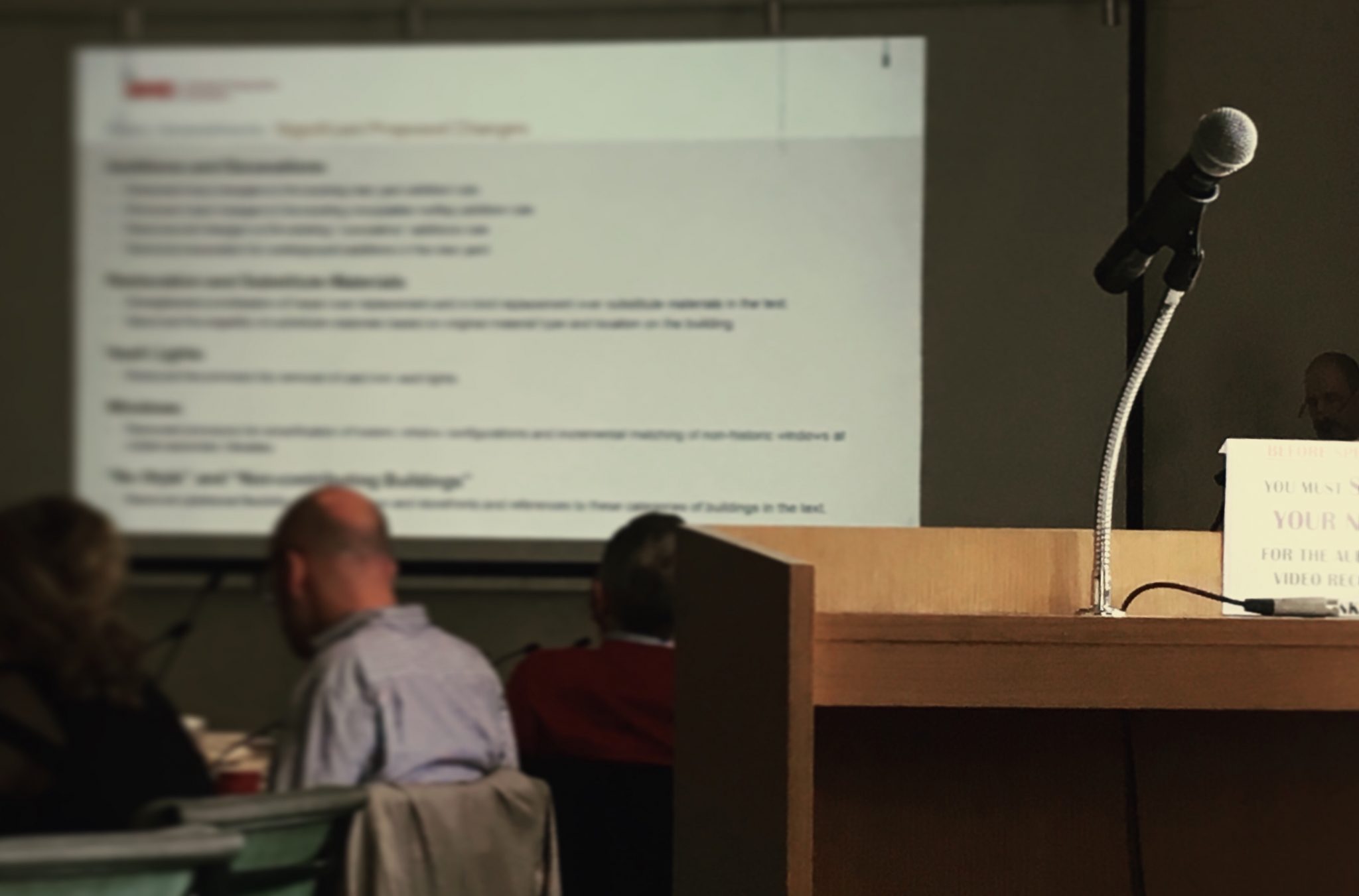 The Landmarks Preservation Commission hearing room was busy, hot, and brightly sunlit yesterday afternoon.  One rumbling A/C unit tried, and failed, to counteract the sudden onset of summer outside the 9th floor windows.  Beyond each contentious proposal (and there were several), expectation of a later item was simmering.  At the end of the day, the Commission was scheduled to be briefed on the proposed rules changes–and to react to the public testimony given this past March.  Much of that testimony had criticized the Commission’s proposed rules overhaul.

LANDMARK WEST! staff were also anticipating the Certificate of Appropriateness hearing of an item in our district: 104 West 76th Street, where a rooftop addition and window enlargement had been proposed. The testimony was written and ready to go. Staff was ready to present it.

At around 4 PM, however, the Commission closed the hearing portion of their day, electing to skip three scheduled items (104 West 76th Street among them)–and to proceed on to the rules briefing. It made sense to accelerate the schedule–they were already over an hour behind, and this point of business wasn’t going to be a quick one.

Around the room (slightly less crowded now, but no less engaged), preservationists and concerned citizens lifted up protest signs–thick shiny papers emblazoned with the message “DON’T CUT THE PUBLIC OUT OF THE PROCESS”. These had been held high at the hearing in March, and now they rippled out across the room once again–a reminder of the outspoken public pushback that had led to this moment.

The discussion began with Chair Meenakshi Srinivasan acknowledging that the proposed rules had been met with significant criticism. She continued by repeating a premise which has been a key part of her push for these rules: that by codifying common Commission practice, the process will become more, not less, transparent.

Srinivasan then described steps taken in the pursuit of transparency during her time at the Commission. Perhaps she was seeking to provide a final closing narrative of her time as Commissioner, since in three days time she would be leaving her post, having stepped down as Chair unexpectedly on April 19th. It was a move which many had seen as potentially a reaction to the public opposition to the rules.

According to Srinivasan, the measures to increase transparency were thus:

One can hope the review of these tools was helpful to members of the public who might not already be using them, but this was by no means the main act that anyone had come to see. The preservation community waited in anticipation of the real meat of the matter: the reveal of the rules, and how they might have been altered–or not–in reaction to public comment.

The presentation of the revised rules was handed on to LPC’s General Counsel Mark Silberman and LPC First Deputy Director of Preservation Cory Scott Herrala. While characterizing some of the public comment as the “result of confusion” about the rules, Silberman did concede that significant critiques had been voiced–and proceeded to detail these critiques, along with the LPC’s response to them.

After a few minutes retorting to the public comment on the organizational structure of the rules (opposition which he described as “misplaced”) and commenting on more technical concerns of this kind, Silberman continued on to real takeaway of the briefing, which laid out amendments to the proposed rules changes–amendments which did in fact respond to the public comment and critique so passionately expressed in March.

Although not perfect, the updated rules do reflect much of we had fought for.

The full presentation is available HERE. After the briefing and Commission discussion had ended, LW! staff also approached Herrala and asked if he might make public his and Silberman’s script that ran alongside the presentation–which included greater detail and clarifications. He told us that they would not be providing that script.

In the Commission’s discussion following the briefing, it was clear that the Commission was indeed affected by the public’s critiques. Chair Srinivasan continued to defend certain elements of the rules, and pushed back against comments that staff would be overburdened and unprepared for these changes, but other currents of conversation affirmed the impact and astuteness of public comment.

A chance for the public to respond to these and other changes to the rules may be waiting in the wings, as some Commissioners suggested the possibility of a second public hearing. The idea was first voiced by Commissioner Adi Shamir-Baron, and was seconded by Commissioner Michael Devonshire.

Whether or not the public will be given a chance to speak again on these rules, New Yorkers can be heartened by the knowledge that the people made an impact. Had the community not shown up and spoken out, it is highly likely that the original damaging rules would have swept through unchecked, weakening the strongest preservation law in our nation.

But we reviewed the facts, we read the thick pages of the proposal, we analyzed how it might be distorted and manipulated by unscrupulous parties, and we showed up, speaking clearly and passionately.

That has made all the difference.