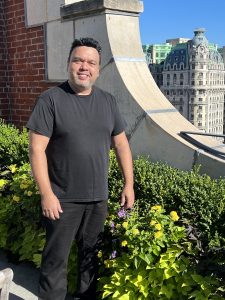 Constructed in 1902, the Dorilton is definitely over-the-top gilded age style. But, the key to its enduring splendor is in the details. And beyond that, it’s immeasurable how much the building staff’s dedication to the building and the shareholder’s commitment over the past 25 years to maintenance and restoration has ensured its contribution to the Broadway vista.

Dorilton Superintendent Robert Domingo is remarkably informed and unequivocally passionate about the building. He’s available to shareholders 24/7 and prides himself on being able to solve most problems.

A great deal of attention has been given to the mosaics on the floor of the co-op’s lobby where missing pieces were replicated to match the originals. The same care was taken with lighting fixtures and reproducing wallpaper in some hallways to match the original wall coverings. Many apartments still have original wood archways with French doors decorated with elaborate glass embellishments. These separate the living room from the formal dining room. Robert notes that the largest apartment in the building has 15 rooms. Many apartments have been combined. “When I first came here there were 72 apartments. Now there are 46.” 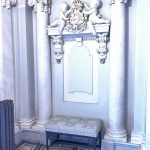 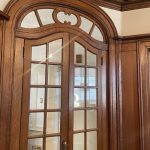 Robert urges everyone to take an appreciative look at the building from across Broadway where 5-story bay windows ornament the facade along with two beautiful, larger-than-life sculptures of women with flowing robes. Just as with the floor mosaics in the lobby and in other hallways, great care was taken with the restoration of the large cherub decorations in the lobby and crests decorated with a gilded “D”.

Through the years, some of the original moldings, mahogany front doors, and hunter-green and gold fireplace tiling were damaged or removed. But today, one shareholder is having these items reproduced to look as though they were always in place.

There are two outdoor relaxation venues. On an informal tour, Robert shows off a roof deck that is well-planted and has a view of the eclectic rooftops of nearby buildings. Robert is particularly pleased that the planting beds include an herb garden “Basil, thyme, and mint. “A lot of shareholders come up to pick the mint. 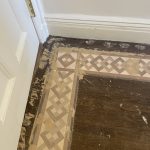 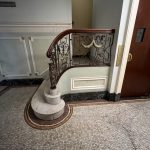 A monumental brick-faced chimney still functions well as part of the building’s steam heating system. It is truly awe-inspiring when seen from the 2nd-floor community/ children’s recreation terrace. The same area is flanked by a huge and complex fire escape that inspires admiration for early 20th Century engineering.

Robert’s job as superintendent suits him perfectly incorporating his many interests and skills. Robert was born in the Philippines. After his family moved to New York, his mother worked in the flower district. Through one of her friends, Robert became an expert at pruning and planting bonsai and this in turn led to a job in interior design working for a company designing artificial scrubs and other plantings for TV sets and department store windows. He also learned to do faux marbling. It was on a marbling job of this kind at one of the Dorilton apartments that he met the former superintendent. The man offered Robert a job as a porter. “I thought he was joking,” recalls Robert. Once he realized the offer was real, he accepted and enjoyed the next 31 years and subsequent promotions that acknowledged his work.

Robert and his wife, Josefina, an accountant live and raised their children at the Dorilton. Both daughter and son have done well academically. Robert’s son recently graduated with honors from Hunter College. His daughter has a BA from Carnegie Mellon and a Master’s degree from Carnegie Mellon in Computer Engineering and Electrical Engineering. “They both have good jobs. They have no debt for anything,” says Robert. He explains that his job at the Dorilton has been essential to his family’s well-being.

One particular joy in having been in the job so long, Robert says, is that “children who grew up here return with their own children. “They love to come back,” says Robert who clearly enjoys greeting them.

And, in addition, a special creative touch to the Dorilton, for the past 22 years, Robert has been decorating the lobby for Halloween. He welcomes the challenge to make each year even better than the last.