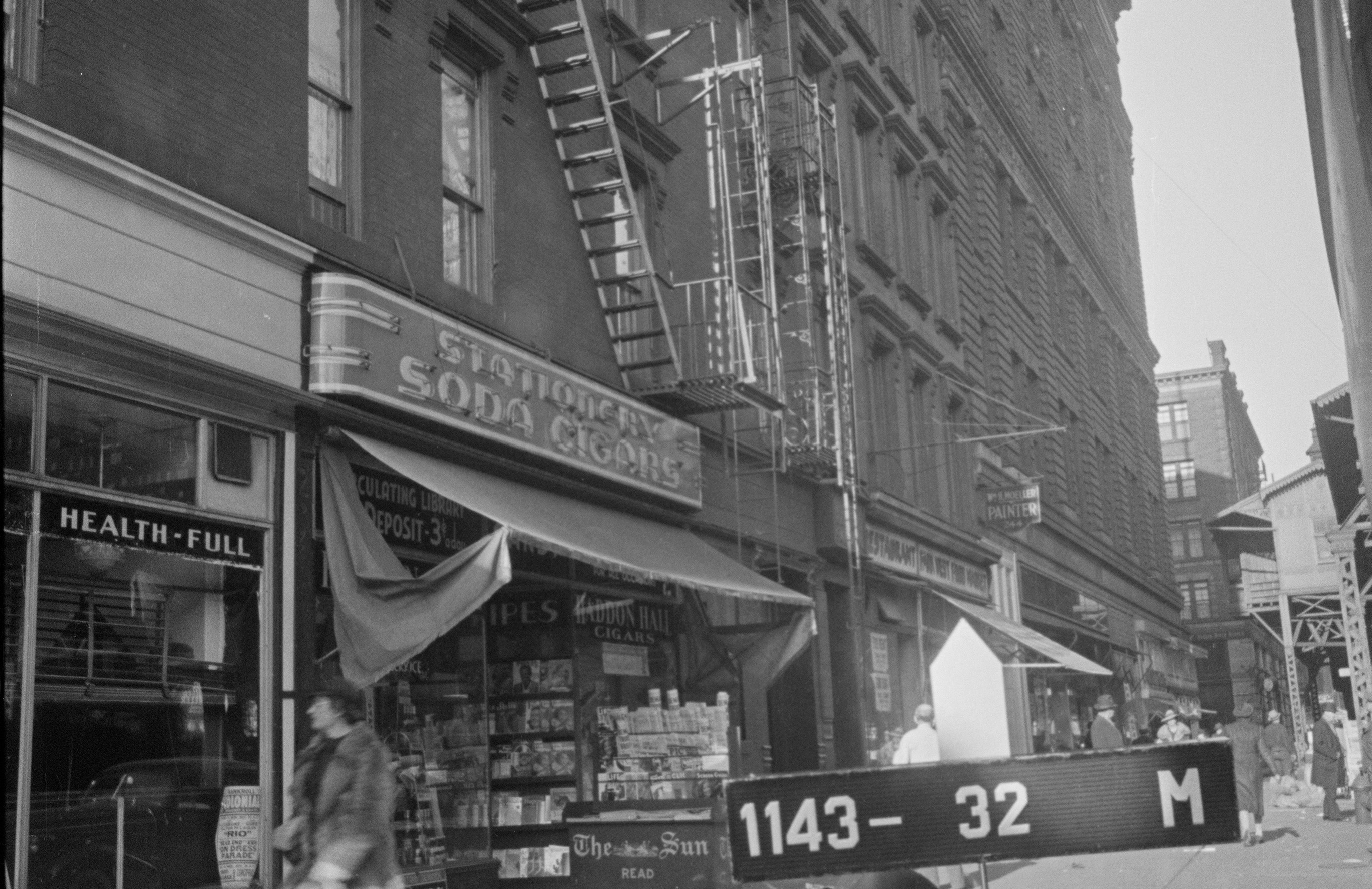 In August 1883 the architectural firm of Thom & Wilson filed plans for a four-story brownstone store and flat (or apartment) building on the northwest corner of 71st Street and Ninth Avenue (soon to be renamed Columbus Avenue) for developer John M. Ruck.  Simultaneously, the architects filed plans for “two four-story Connecticut brown stone [sic] dwellings” abutting that site, at what would become 244 and 246 Columbus Avenue.

Each of the narrow, 14-foot-wide residences would cost Ruck $10,000 to construct, or about $267,000 in today’s money.  Thom & Wilson designed them to nearly perfectly match the neo-Grec apartment and store building.  The windows of the upper floors were fully framed in brownstone, their sills sitting upon small brackets and their lintels capped with molded cornices.  Each house had its own, cast metal cornice.

Although built as private residences, it did not take long for the owner Adeline I. Phillips to convert the upper floors to apartments.  Typical of her residential tenants was Stephen Mullins, who worked as a mason’s helper for the Department of Docks.  When he moved into 244 Columbus Avenue in 1891, he was making 30 cents per hour.  He received a raise to 50 cents in 1897, but two years later, while still living here, his pay was reduced to 37.5 cents an hour.

Living in 244 Columbus by 1895 were Clara Beltzung and her son, Frank M. Belzung, a teacher.  Clara ran an employment service for domestics from her second-floor apartment and was affluent enough to maintain a country home.

The criminals broke into the residential entrance and then went to the cellar.  They bored holes into the floor of the butcher shop with an augur until they could remove a section large enough to climb through.

It was around 1895 that Adeline Phillips converted the ground floors for business.  In 1896 the Lahnstein & Strauss butcher store occupied the combined shops in 244 and 246 Columbus Avenue.  The business narrowly escaped being burglarized late on the night of December 20, 1898.  The Morning Telegraph said, “Lahnstein & Strauss have a meat market and do a large business.  Their receipts on Tuesday were not far from $1,000 in cash, which was locked up in the safe, which occupied the middle of the floor, directly behind the cashier’s desk.”  The safe and its contents became the target of experienced safecrackers that night.

The criminals broke into the residential entrance and then went to the cellar.  They bored holes into the floor of the butcher shop with an augur until they could remove a section large enough to climb through.  The Morning Telegraph explained, “they extinguished the lights in the rear of the room, leaving one in the front window to ward off the police.”  Then they went to work on the safe door with chisels and drills, while stuffing the dumb waiter with rags and paper to deaden the noise of an explosion.  Once the door was drilled with holes, they were packed with an explosive and set off.  The force of the discharge damaged a corner of the street door, and yet the safe was not broken open.

When the store was opened the following morning, according to the article, “There were the tools of professionals, jimmies, bits, fuses and other burglarious instruments scattered around where they were left when the burglars fled.”  Police surmised that the noise of the explosion frightened them away so quickly that they abandoned their tools.

In 1899, Hugo Lahnstein filed for bankruptcy.  N. A. Cushman & Co. briefly took over the butcher shop.  Then, on February 22, 1902, The National Provisioner reported, “B. Salomon’s Sons, the well-known butchers of Central market, have bought the handsome market formerly conducted by Mr. Cushman at 244-246 Columbus avenue, next door to Park & Tilford.  These gentlemen have been in business for many years. And are the right men in the right place.”  The article noted, “This store is considered one of the finest fitted up markets on Columbus Avenue.”  B. Salomon’s Sons New Central Market would be in the space for years.

By 1901 Frank Beltzung had given up teaching and joined his mother’s Cosmopolitan Employment Bureau.  Also working in the office was Clara’s sister, Clarita Finney.  It appears that their former apartment had been completely converted to an office to accommodate their large clientele.  The normal calm of the office was anything but that on April 12, 1909.  The New York Evening Call reported, “Nellie Galvin, a domestic, started on a rampage in Mrs. Clara Boltzung’s [sic] employment agency on the second floor of 244 Columbus avenue, yesterday, and it took a sextet of husky men to subdue her.”  Nellie, who was about 30 years old, had been sitting with about 50 applicants waiting to be called upon.  Recently out of work, the stress seems to have been too much for her.  The New York Evening Call reported, “She picked up a clock and hurled it at Clarita Finney…but it missed its mark.  Shelves, books and furniture were handled with no gentle care by Nellie until the police and four big butchers from a nearby shop arrived.”  Nellie was taken to Bellevue Hospital for observation of her mental condition.  One might assume she did not find a job through Clara Beltzung.

“She picked up a clock and hurled it at Clarita Finney…but it missed its mark.  Shelves, books and furniture were handled with no gentle care by Nellie until the police and four big butchers from a nearby shop arrived.”

The New Central Market remained in the ground floor space until the building was sold in 1925.  The following year the combined buildings were converted to offices above the store level.  Then, in 1941, a renovation resulted in two apartments on each upper floor.

In the mid-1980’s to early 1990’s the former butcher shop was home to the restaurant Tuesday’s West.  Following another renovation to the building, completed in 1994, the restaurant China Fun West moved in.  There was now an office on the second floor, and one apartment each on the upper floors.  China Fun was replaced at the turn of the century by The Star Club, a cabaret that featured lived bands on certain nights, with a live deejay on the others.  Madonna used The Star Club to film one of her first music videos.

The Star Club morphed into Columbus 72, with two dance floors and two lounges.  Owned by Marc Glazer and John Juliano, when it closed in 2013, it was the last Upper West Side venue to have a cabaret license.  If locals expected a new club to open in the space, they were disappointed.  In December 2013 the clothing and accessories store, Vince, opened.

While the storefront has been brutally neglected, two of the cast-iron piers of the Lahnstein & Strauss butcher shop survive.  Other than replacement windows, the upper face is essentially unchanged since 1883.

Tom Miller is an social historian and blogger at daytoninmanhattan.blogspot.com/

Shop local to support the businesses currently at 466-468 Columbus Avenue: