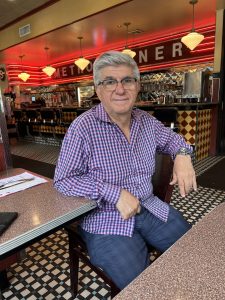 The ultra-vintage Metro Diner at 2641 Broadway at the northwest corner of 100th Street was used four times as the setting for episodes of Pose. The groundbreaking FX TV musical series ran for four seasons, and focused on NYC’s transgender underground ball culture, and featured many LGBTQ actors.  The diner setting the show’s producers were after was the distinctively mid-century maroon and ivory striped vinyl-upholstered rounded window seat and aluminum rimmed table. Then, very recently diner owner Frank Tsiamtsiouris was approached by location scouts for a Netflix production that may use the Metro Diner as a backdrop if they negotiate the right price.

Frank’s own success story could very well be its own mini-series. Frank was 11 when he arrived in NYC from a Greek mountain town with his parents and three siblings. The family settled in Queens. Soon, he was working after school and evenings at a midtown diner owned by a family member. “We had $8,000 in expenses to pay back for transportation, apartment, and food,” Frank recalls. 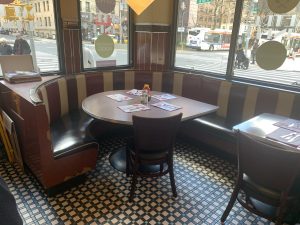 Summers, he worked at The New Olympia, a Greek hotel in the Catskills near Hunter Mountain. He went on to buy his own diner with some partners located near Port Authority. He worked as a waiter in Greenwich Village and then uptown at the Argo Diner on Broadway at 90th Street which had a longtime local following from its earlier days as Starks. In 1974 he bought Argo’s, remodeled it in 1982, and renamed it City Diner. It’s still going strong. In 1988, Frank bought the Manhattan Diner at 95th and Broadway. This diner, which Frank entirely transformed from a Chinese restaurant, looks straight out of the 1920s, complete with U-shaped counters, swiveling stools, and vintage-looking light fixtures.

Given that the building that now houses Metro Diner is old, Frank spared no effort in going all the way with vintage. The floors are patterned in turquoise and black tiling and the counters tiled in brown and yellow, everything from lamps to cake holders, sugar dispensers, and a red, blue, white, and green neon-framed clock. Everything feels as if they have been transported from the late 40s, somehow remaining incredibly shiny and bright.

Frank sees diners as having a distinctive role in a neighborhood. “It’s part of the fabric of the neighborhood. It’s a welcoming, gathering place. It’s not expensive. People come casual or dressed up. It caters to a wide variety of food preferences,” he says. Also, there’s no question that one of the great joys of eating at a diner is that you know what familiar foods are most certainly going to be on offer. Yes. Western omelets, tuna and grilled cheese sandwiches, burgers with all sorts of toppings, egg creams “made the old-fashioned way.” For heartier fare, selections include strip steak topped with mushrooms and a side of spinach, shrimp scampi. Pre-pandemic, the Metro Diner drew tourists and locals. “Now everyone is a neighborhood regular. Some come in two or three times a day.” Frank observes that times are tough now. He’s concerned about an increase of crime in the neighborhood. “People are nuts. More afraid than ever to say what they think.”

Still, Frank, who lives with his family in New Jersey, has an optimistic view of life. He commutes to the Upper West Side every day managing the ups and downs, the challenges of staff concerns, deliveries, equipment repairs. He’s always interacting with customers ensuring that they enjoy all that the diner experience has to offer.

Customers have become fans of the plentiful outside seating. They come alone, with a dog or with friends. This outdoor space, including a covered seating is a sort of annex to the diner. It’s named with a touch of humor, Metro Garden.