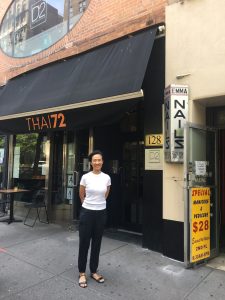 Jade Oh on the sidewalk below her second floor showroom studio

Not entirely by chance, but sometimes long considered plans are spurred into action while on a walk to take advantage of beautiful weather or during conversation over a good meal.

That’s what happened a number of years ago when an Upper West Side couple went out to brunch on 72nd Street.  Their apartment in a building a few blocks away had been renovated.  Only the kitchen remained in need of work.  One thing led to another and they found themselves in Jade Oh’s stylish 2nd floor studio at 128 West 72nd Street that announces itself to the street with a large stenciled D2 on a huge oval window.

How do prospective clients find out about her service?  “It’s mostly by word of mouth,” says Jade, designer and owner of the D2 Design & Works firm that specializes in kitchens and baths.  Her palette is sleek: mostly black, white and gray with touches of chrome accented by dramatic lighting.  Typically, these subtle neutrals are accented with a highlight of color…a green or a blue.

Jade started out on her career designing commercial interiors in her native Seoul, Korea.  She was married to an ENT physician, a man she describes as “a great guy and very loving to our two daughters.”  He was diagnosed with liver cancer, underwent lymph treatments and seemed to be doing well.  It was his idea to come to the United States.  The family settled in Staten Island NY in 2003, and then moved to Ridgewood NJ in 2007.

Jade enrolled at Pratt and earned a Master’s in Interior Design.  She focused on a specialty that would combine creative design with sales, rather than drawings alone.  A job at one design firm led to another and she became familiar with the Upper West Side while working at Hanssem, a cabinetmaker showroom on West 72nd Street.  Her husband’s health was failing and he passed away in 2011.

Over time, not only had Jade obtained a Green Card, gained experience, developed her own design style and become fluent in English, but she also had a growing network of suppliers and contractors who knew her work and were enthusiastic about partnering together.

Jade decided in 2014 that the moment had come to open her own firm.  A self-described “work-aholic,” her design skills and diligence support a very busy practice and several staff members.

Asked for specific examples of jobs that come by way of word of mouth.  Jade recalls that couple who arrived in her studio after their brunch.  “They were very pleased.  Referred me to people they knew in their building and I think we did three or four more kitchens there.”  She also works with a contractor “who has an eye for design” and frequently refers clients to her.

The home, where she’s raised her two daughters—one is married and in medical school the other heading to law school, has not been neglected.  Jade described her own kitchen done in pale colors with ceramic flooring that looks just like wood. It combines simplicity with functionality producing a calm, beautiful setting for the preparation of food.