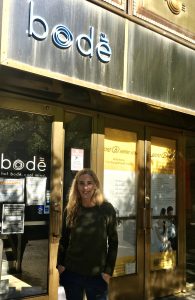 Jen Lobo outside of bode nyc at 143 West 72nd Street

Health and wellness continues to concern everyone in our efforts to face up to the uncertainties of the Covid pandemic.

Ongoing resilience comes more naturally to some people than to others and bodē nyc Upper West Side located at 143 West 72nd Street, specializes in teaching the original hot yoga practice.

At bodē, Bikram Hot Yoga is “The Original Hot Yoga”. The practice exercises the body from the inside out, working all the systems of the body (circulatory, digestive, immune, cardiovascular and endocrine systems). Each session allows the participant to detox, release stress, build strength and flexibility as well as improve one’s overall quality of life.

What differentiates this practice from other types of yoga?  Jen Lobo, co-owner with Donna Rubin of bodē nyc, explains that every session takes the yogi (participant) through 26 positions performed in a specific order, in an environment heated to 105 degrees Fahrenheit. The postures performed in this way exercise the internal organs including the pancreas and liver and promote circulatory and digestive wellness as much as they help strengthen the muscles of the neck, back shoulders and limbs.

­­Learning to breathe through the nose is essential, “No mouth breathing” says Lobo who explains the practice increases relaxation and induces more energy and ability to focus. Sessions may be one hour, 75 minutes or an hour and a half in duration. Classes cater to all levels of yogis – from brand new beginners to the more advanced.

Many people are hesitant to try yoga saying “they aren’t flexible,” Lobo says, but you don’t get flexible without a yoga practice.

Since hot yoga necessarily induces sweating, participants are reminded to take electrolytes and hydrate well before sessions and to take breaks to hydrate whenever needed during the class.  Lobo recommends drinking coconut water as one of the best ways to hydrate.

Newcomers and those who have not visited since before the pandemic are offered a special Welcome Package for $55 for three classes.

Growing up on the Upper East Side, Jen went to Loyola and then to boarding school. Lobo played many sports during high school and college and became a marathon runner, which is how she became interested in yoga as a way of becoming more flexible and a better athlete. She was introduced to the practice of hot yoga during an eight-year stay in San Francisco. On returning to New York, she met Donna Rubin at a yoga class and eventually the two women started their business 22 years ago. In addition to its Upper West Side location, bodē nyc studios are also on the Upper East Side and in the Flatiron District.

Pre-Covid, there were regularly 40 participants in a class.  Now, being mindful of Covid precautions, class size is limited to 29. Specialized sessions are also available for High Intensity Interval Training (HIIT) and Vinyasa hot classes, adds Lobo. Yin classes will also be added to the schedule soon.

The studio on West 72nd Street is large, immaculate and spare, conveying the impression that distractions are minimized while the focus is all on the “moving meditation” of the class.

Lobo explains that bodē nyc, the name of the studio, evokes a reference to the Sanskrit work Bodhi, meaning enlightenment. The cairns symbol in the design of the “O” in the bodē logo represents being “on the right path” – path to true enlightenment and optimum health at bodē nyc.

Hot yoga was originally brought to California in 1974 by Indian born and trained yogi Bikram Choudhury.