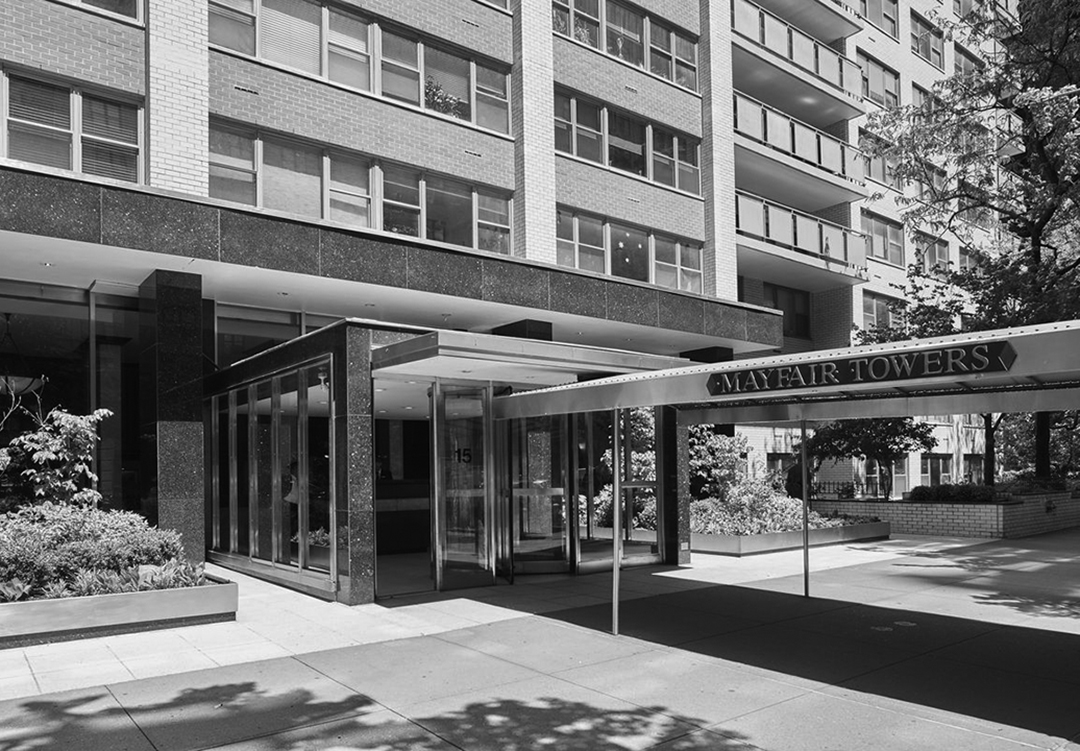 On November 18, 1933 journalist David G. Bareuther, writing in The New York Sun, remarked on the private recreational yard to the western side of The Dakota Apartments, “an area even larger than the site of the building itself.”  The fenced area was created for the original residents of the upscale building and held tennis courts.  “This combined property forms a plot virtually the size of the ground on which the Empire State Building stands,” he said.

The space where Victorian men and women had batted tennis balls over the net had become a parking lot by 1961.  In August 1961, the First National Realty and Construction Corporation purchased the 250-foot wide property with intentions to erect a high-rise apartment building.

The architectural firm of Horace Ginsberg & Associates designed the structure, which was completed in November 1964.  The New York World-Telegram and Sun called the 37-floor Mayfair Towers the “tallest postwar apartment house on the West Side.  Faced in glazed white and gold brick, it gleamed in the sunlight.  The article added, “its many balconies and terraces blend smoothly into the slender lines of the structure.”

The 498 apartments ranged from two-and-a-half to six rooms, with rents from $180 for the smallest to $335 for the largest (about $2,750 per month for the most expensive in today’s money).  State-of-the-art amenities included double-door refrigerators, electric dishwashers and “built-in custom cabinets [with] counters with laminated wood grain finish.”  An elaborate security system was intended to protect guests and their property.  Along with a 24-hour doorman, there was closed circuit TV and individual alarm systems in each apartment.

The New York Times reported on June 18 that the 38-year old surgeon Ronald Forster had been “arrested yesterday after he fired four shots into the street from his apartment.”  Forster explained that he had just cleaned his rifle and “was testing” it.

An added convenience was an underground parking garage capable of holding 200 automobiles, the entrance to which separated the Mayfair from the Dakota and provided a gap between the two buildings that offered extra light and ventilation.

Dr. Forster got himself into a bit of hot water in the summer of 1970.  The New York Times reported on June 18 that the 38-year old had been “arrested yesterday after he fired four shots into the street from his apartment.”  Forster explained that he had just cleaned his rifle and “was testing” it.  Police were not impressed by the excuse, especially after finding “two rifles, a shot gun and a 22-caliber gas pistol in the surgeon’s apartment.”  Charged with possession of dangerous weapons, reckless endangerment and prohibited use of firearms, he was paroled in the custody of his psychiatrist and ordered to appear in court. 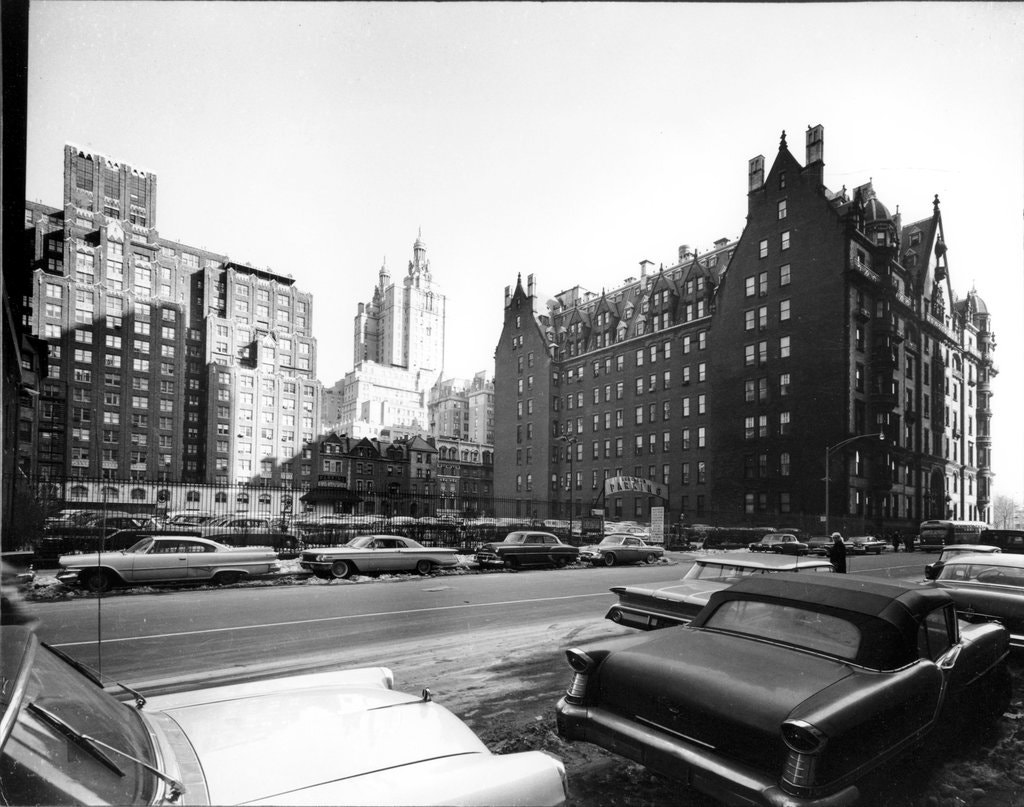 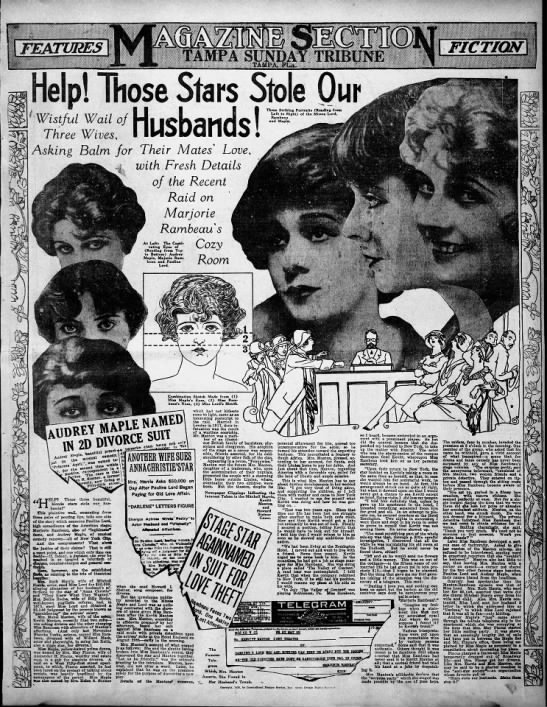 Living here in a two-and-a-half room apartment at the time was Lola Stern, a native of Belgium.  The quick-witted grandmother who spoke four languages fluently lived alone and ran a candy store, Lola’s French Sweets, on West 74th Street.  A local told a reporter that she “made her own candy, hand-made, used an old-fashioned stove, her customers came from all over—the Kennedys, yes, the Kennedys.”  Tragically, the Mayfair Tower’s intricate security system could not protect Lola.

When she did not appear at the store on May 20, 1971 her granddaughter went to the apartment to check on her.  She found the 93-year old woman on the floor, strangled with an electric appliance cord.  It did not take police long to track down the culprit.  Wilbur Wright had been released from the Auburn Correctional Facility a few months earlier having served a nine-and-a-half-year sentence for manslaughter.  The 36-year old obtained a job as a deliveryman for a dry-cleaning establishment.  When he murdered the elderly woman after bringing her cleaning to her apartment that morning.  He claimed self-defense.

Lola Stern was not the only candy maker in the Mayfair.  Martin Klein, the co-founder and vice president of Barton’s Candy Corp. and his wife, the former Regina Ischof, lived here at the time.  He had fled Vienna in 1938 after Austria was taken over by the Nazis and the following year founded.  The Barton chocolates were made in the Viennese tradition, which he knew so well.

Another resident was Audrey Maple, a musical-comedy star of the 1920’s and ‘30’s.  She had played with stars like Jeanette McDonald and appeared in several productions for the Shubert brothers.  Following her marriage to Ernest A. Zadig in 1940, she retired from the stage.

Ouida Bergere formed her own talent agency during World War I, managing the careers of renowned actors like Lionel Atwill, Adolphe Menjou and Mazimova.  Her talents were seemingly endless.

Two other tenants living here in the 1970’s who were related to the performing arts were Nicolas Moldavan and Ouida Bergere Rathbone.  Like Martin Klein, Moldavan had left his native country, Russia, because of political upheaval.  He had studied violin at the Odessa and St. Petersburg Conservatories but left during the Revolution.  After arriving in New York, he gave up the violin in favor of the viola.  His career included playing with the famous Flonzaley Quartet, the Stradivarius and the Coolidge Quartets.  During World War II, he joined the NBC Symphony, conducted by Arturo Toscanini.

Ouida Bergere Rathbone was the widow of the famous actor, Basil Rathbone.  A former actress herself, she had made her Broadway debut in 1911 in The Stranger.  She formed her own talent agency during World War I, managing the careers of renowned actors like Lionel Atwill, Adolphe Menjou and Mazimova.  Her talents were seemingly endless.  From 1915 to 1935, she was a screenwriter for Pathé, Paramount, First National and Metro-Goldwyn-Mayer studios (and designed the costumes for at last one production, as well).

Otto Kallir was born in Vienna on April 1, 1894.  He established the Neue Galerie in 1923 specializing in 19th- and 20th-century painters like Munch, Van Gogh and Signac.  Fleeing World War II, he brought his family to New York in 1939 opening the Galerie St. Etienne.  He and his wife Fanny were early tenants in the Mayfair Towers.  Despite his important work in the art field (he was highly responsible for introducing Americans to Austrian Expressionist painters and in the 1950’s sold the Museum of Modern Art its first work by Gustav Klimt), he would be best remembered as “the art dealer who launched the late-life career of Grandma Moses,” as mentioned by The New York Times in December 1978.

The handsome white-and-gold building continues to be home to upscale residents.  Its clean 1960’s lines stand in stark contrast to its ornate Victorian neighbor whose tennis courts it replaced.