86th Street and the Life of Adventure 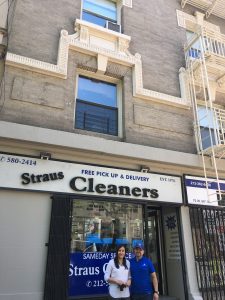 Karem and Kenyi Sun were high school sweethearts in Lima, Peru.  Their North American adventure began when Kenyi‘s father came to New York about 20 years ago.  He was successful in becoming part of the management of a limo service.  He went back to Peru and returned to New York with his then 17-year-old son Kenyi and his younger son, Shykymy, who is now a Physician’s Assistant.

Having found work in building management and maintenance that used his skills and that he enjoyed on the Upper West Side, Kenyi returned to Peru.  He and Karem, now engaged to be married, came to New York together.  They were optimistic about this adventure and things have been working out.

Regarding housing, for example, Income-based Mitchell Lama housing may take many months if ever to approve applicants for housing.  However, luck was on their side, the Suns received a positive call after only six months on the waiting list.  Their apartment on Riverside Drive at 135 Street is an easy commute to West 86th Street between Columbus Avenue and Central Park West that Kenyi joyfully calls “My Block.” 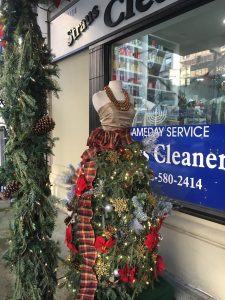 Outgoing, personable and tirelessly hard working, Kenyi’s all-around interests, multi-faceted building maintenance skills and great reliability have made him a sought-after employee in the roles of superintendent, doorman and other related jobs. He works three or four jobs at the same time.  He works for example as Facilities Operation Manager at Bard Graduate Center and as a doorman at 10 West 86th Street. The gray cloud in the sky is the high rent charged by the landlord of the building where they lease their store who so far has not responded to their requests to lower the rent.

Going back some time, Kenyi made friends with Jeffrey Eagle, who was then the owner of Straus Dry Cleaners, which originally opened in 1970.  The business owner frequently employed the younger man as a driver for his own errands and for store deliveries. Kenyi and Mr. Eagle had discussed the possibility that the younger man would be interested in purchasing the Dry Cleaners when Mr. Eagle decided to retire.  And that’s just how Karem and Kenyi became owners of Straus Dry Cleaners which in addition to dry cleaning, offers tailoring and wash and fold services.  Mr. Eagle mentored Karem in all of the front of the store business operations, which she now performs on her own.

The couple were married once in NYC in 2006 and had a religious wedding in Lima in January 2007.  Travel is most often part of the romantic and adventurous life.  The couple have asked friends to mind the shop and that’s made it possible for them to visit Spain, Italy, the Dominican Republic and Mexico.

It’s still months away, but a sign of the joyful imaginative way the Suns approach to life is on view in front of the shop in December when Kenyi whimsically dresses a shop manikin up in an elaborate Christmas gown made of evergreen garlands, red and green plaid ribbons and red bows.