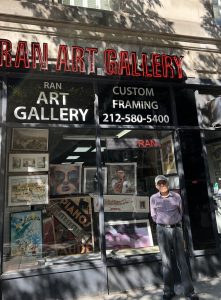 “I love my country, but we were pushed between the Afghan mujahideen (armed Islamist rebel groups) and the communists.” This is how Jamaluddin Azin (Ran) explains a life-changing decision in 1990 to leave his native Kabul with his wife and two young sons and immigrate to the United States. A third child, a girl, was born in California where they started their new life.

Onward to New York, after seven years on the West Coast the family settled in Long Island where numerous relatives were already living.

Ran spoke very little English. He had worked as an accountant for the government in Kabul but “we did figures in our head and on the calculator. Here it was all on computers. Something I didn’t know at all.” Considering his different interests and willingness to work hard to succeed, Ran embraced an early interest in art to forge a new career. He leased a shop at 336 West 57th Street. With the arrival of Whole Foods and the Time Warner Building (Now Deutsche Bank Center), the landlord of Ran’s building hiked rents, projecting a transformation to an upscale community. Businesses closed and Ran moved further uptown. From 2007-2021 his shop was located at 2470 Broadway, across the street and a block down from 2449 Broadway its current address.

Ran’s calm, engaging personality, framing skills (learned on the job), and selection of prints was appreciated by his customers from the time he first started his business. Talking about their kindness and support brings tears to his eyes.

Ran sells a wide variety of prints. He offers art that appeals to him. Sometimes he doesn’t even realize that what he’s chosen is on a recurring theme. Customers at one time pointed out to him that he had many prints with images related to music. Today, there are quite a few prints, and delicate line drawings relating to NYC bridges and other city sites. This selection is deliberate, Ran says people buy reasonably priced prints of the city for themselves when they are moving in and out of town and tourists are always looking for cityscapes that will remind them of their travel experiences.

Though long a New Yorker, Ran is close to his Afghan heritage. “In 2013 I went there to find my older son a bride”. (The practice of arranged marriages to relatives is still going strong.) Afghan communities are large and close-knit. Ran said he hosted the couple’s 3000 guests in Kabul. Ran admits wryly that he tried to do the same for his second son but was unsuccessful. His sons are accountants, and his daughter is pursuing a career in medicine. Ran’s wife Hallima, has been working for 16 years for the Commack, NY High School and Middle School cafeterias.

He loves his work and would be at the store night and day if Ran hadn’t agreed with his family that he would take one day a week off.