Envisioning Smiles and Making them Happen 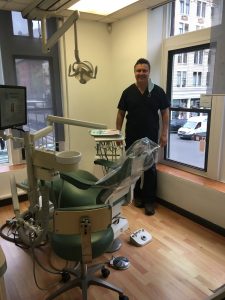 ProSmile is a family dental practice whose partners are brothers Drs. Slavko and Val Duzdevich.  Slavko specializes in orthodontics and Val in implants.

The open plan office has partitions strategically designed to ensure privacy, while still maintaining a light, airy environment.  Then, there’s the second floor corner view on what’s got to be a quintessential UWS vantage point at the intersection of 72nd Street and Columbus Avenue.

“There’s everything out there,” says Slavko motioning at the tall, wide windows.  This means patients have an ever-changing view on the diversions of the street scene.  Understating the reality, Slavko jokes, “this is better than posters that would damage the walls.”

Early one morning, Slavko took time to provide some background about himself and the practice.  The brothers grew up with their parents in Panama. Their father had moved from the former Yugoslavia to Panama as a young man, married and started a family there.

They moved to New York when Slavko and Val were children.  They first lived on 49th St. and 10th Avenue in Hell’s Kitchen and then moved to new projects that were built in the Bronx.

The parents worked hard, their father as a short order cook and their mother worked in a hat factory, “she was laid off every other week” her work hours depending on the volume of orders.

For four years while in high school, Slavko held a part-time job as a Dental Lab Technician at a dental clinic that was maintained at the Martin Luther King Jr. projects where the family lived.  He went on to Bronx Community College and then, not yet focused on a career, for three years was selling hot dogs from a push cart.  Restless in that job, wanting more out of work and life, he remembered the activities as a Lab Technician and it occurred to him, “how cool to be a dentist!”  Resolving to become a dentist, he earned a BS at City College, earned his dentistry credentials at SUNY Stony Brook and went on to complete a three year residency in Puerto Rico.

On his return, Slavko and his brother opened a practice on West 72nd Street near West End Avenue.  “When the practice grew we moved here,” he says.

Slavko talks about orthodontics poetically.  “I see it (the result) in my head, he says, explaining “like a flower with closed petals and knowing how it’s going to look when it’s open.”

A generation ago, orthodontists mostly addressed the dental issues of adolescents.  Increasingly with the development of transparent braces, people in their 40’s and 50’s are having their teeth straightened.  For aesthetics and function yes, but also as a measure to avoid future dental disease.  Slavko explains it is harder to clean overlapping teeth for example.  Among many other problems patients want corrected are gaps between teeth and protruding teeth, overbites and underbites.

The life transforming development of implants over the past 40 years has been revolutionary.

Basically, removable dentures are often very uncomfortable.  The devices may embarrassingly loosen and move around, causing a clicking or chattering sound when the wearer is speaking.  They are also often lost or misplaced.  Although, admittedly expensive, implants do away with all that, cleaning is needed just as it is for natural teeth, but once implanted, they are part of a patient’s body.