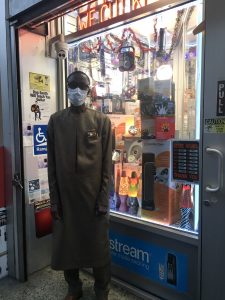 Babacar Fall is not the owner of Gartner’s Hardware at 162 West 72nd Street.  But, over the past 30 years, this shop with its hundreds of bolts, screws, tools, appliances, brushes, brooms, light bulbs and cleaning products along with rental and repair services has become his domain. “In charge of everything,” is how he puts it.

Baba has many friends among the business owners, managers and residents of the neighborhood.  Some come to the store to shop multiple times each week.  Baba knows where every item is placed and when the time comes, replaced.  Although the store stocks a number and variety of items that are well beyond counting, Baba can explain their function and how one product might serve a customer’s needs better than another.

And, then there is holiday-time each year, when Baba has the chance to display his creativity and the pleasure he finds in his job and the store he loves.  This holiday exuberance emerges in the form of an unusual, artistic store window display of a variety of lights.

What’s unexpected are the lava lamps in the storefront window, enticingly mysterious with garish bubbling luminosity. These illuminated curiosities are just as wondrous today as when they first emerged on the market in the early 1960s.  Yes.  These are new, and for sale.

Then, there are the pinkish orange Himalayan salt lights in various shapes and sizes that evoke nights under the stars in far off places.

And, betwixt and between some coffee-makers and other household items are twinkly white Christmas string lights and brightly glowing multicolored garlands.  Inside the store, Christmas lights are also placed here and there among the hardware supplies, making spirits bright.

Baba’s upbeat approach to life has another artistic outlet in the photos he takes on his iPhone in and around the neighborhood, “to make myself feel happy.” There are many taken at Gray’s Papaya where he often has breakfast.  He’s taken many others in the park.

When Baba first came with his family from Senegal in West Africa to New York City he was in his 40’s.  He got a job at Interfloor Hardware, a long-gone hardware store that was once at 188 Columbus Avenue.  The owner of the store and building in which it was located was so impressed with Baba that he let him live for years rent/free in an apartment above the store.

Sometime later, when that store closed, Baba was talking with a man, (a former owner of Gartner’s) then located at 134 West 72nd Street. “He offered me a job doing delivery.” Baba made deliveries briefly until his boss realized how quickly and well he made keys.  He also understood then that Baba had skills and experience working in hardware.

From that point on, Baba took on many responsibilities. When the store later was for sale, Baba encouraged two friends to buy it and he continued to manage the store for them.  Baba is discreet about talking about the store’s owners, but very moved when he expresses that he considers them family who have extended themselves for him in every way.

Baba notes that his interest in holiday decorating began when he was still in Senegal.  There, he explained, “Muslims, Christians, Jews, everyone has parties, dancing and celebrates the holidays together.”