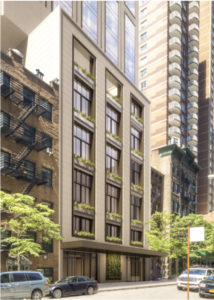 There has been much press about a 800+ foot high tower planned for Sutton Place.  In the wake of bankruptcy, the Bauhaus Group sold to Gamma Real Estate, and once cracks began in a neighboring building’s foundation, work was halted.  In the interim, the East River Fifties Alliance (ERFA) hired specialists and developed a multi-pronged approach to rezoning their neighborhood.  The New York Times recently provided an in-depth update on the neighbor’s cause prior to a forthcoming City Planning meeting on the matter.

LANDMARK WEST!, long a proponent of right-sized development supports ERFA and their community-lead initiatives to achieve a revised zoning for their neighborhood that prioritizes facade articulation, height limits and affordable housing.  Read LANDMARK WEST!’s letter of support below:

LANDMARK WEST! is a not-for-profit community organization committed to the preservation of the architectural heritage of the Upper West Side from 59th to 110th Street, Central Park to Riverside Park.  Founded in 1985 when there were merely 337 landmarks in our district, today we continue to defend the second-densest neighborhood in America, but the threats have escalated–literally.  With two known supertall developments threatening to invade our predominantly residential neighborhood, the sprawl of Billionaire’s Row is no longer a midtown phenomenon.  You have received copies of our May 23 and June 28 letters to Mayor Bill de Blasio sounding the alarm about a 668’ tall building planned for 200 Amsterdam Avenue (at West 69th Street), which if built would be the tallest building in the city north of 60th Street.

LANDMARK WEST!  urges you and your fellow commissioners to approve The East River Fifties Alliance (ERFA)’s proposal for contextual regulations, height limits, and affordable housing to replace prevailing R10 zoning for sections of the East Side in the 50’s, scheduled to be heard by the City Planning Commission shortly.  This community-driven plan, supported by professional research along with New York State Senator Liz Kreuger, Manhattan Borough President Gale Brewer, Councilman Daniel Garodnick, and Councilman Ben Kallos, reflects the informed and well-considered values of citizen-stakeholders who care deeply about the future of their neighborhood and our city.

The ERFA proposal is a serious, thoughtful response to the spread of towers of extraordinary height that is transforming our city’s skyline, changing the scale of our streets, straining infrastructure, raising serious questions about safety, challenging sustainability, and casting shadows.

The unchecked, out-of-scale, “as-of-right” nature of these structures underscores the need for a hard look at policies that facilitate the disruption of the quality of life on our streets by blotting out the sun.  The purpose of zoning is to “promote an orderly pattern of development… [and] to ensure a pleasant environment”.[1]  It is intended to define a limit, not a negotiable baseline for developers to manipulate.  Unfortunately, that is exactly what zoning has become.

To cite further from your website, “Zoning is the language of the physical city… [an] instrument to regulate and establish limits on the use of land and building size, shape, height and setback” (emphasis added).  Today, in neighborhoods across the boroughs, that succinct grammar yields to demands of savvy developers, lobbyists and lawyers; not planners nor architects versed in the histories of cities and their evolution.

There are few areas on this planet where a 1,000-foot tower represents regulation, or a limit on building size or height.  There are even fewer where it would be viewed as a harbinger of a pleasant environment.  Under no definition could the appearance of such a colossus in long-established residential neighborhoods such as the tidy enclaves of Sutton and Beekman Place yield anything else but a catastrophe.

In 1936, the City Planning Commission was established by a vote of the people of the City of New York to provide the structure for comprehensive planning in New York City, replacing a haphazard planning and zoning system that functioned principally through the interaction of interest groups and political forces. As the history on the City website observes: “For the first time New York had a professional agency with a single purpose: to serve the people of New York by planning for the entire city”.  It is time for you and the Commission to serve that “single purpose”, it is time for you and the Commission to address the “supertall” epidemic and reset the balance between Real Estate special interests and the public interest.  You can begin that process by approving appropriate neighborhood rezoning (like ERFA’s proposal), and strengthening policies to ensure reasonable development that enhances–instead of destroys, neighborhood character.  The spirit of the zoning resolution is undermined.  All New Yorkers need you and your Commissioners to stop the spread of supertall buildings into residential districts.