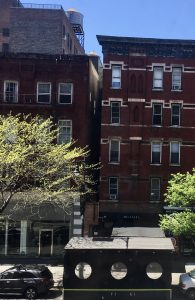 Talk to Garry Kanfer, owner of the Kissaki restaurants in Manhattan and Miami, for just a few minutes and you want to order a Chef’s Table box immediately delivered to your apartment or brownstone for lunch or dinner.

Inspired by the traditional bento concept, the Kissaki box is not only beautifully designed, but its contents exemplify the Chef’s Table Omakase Sushi concept: the highest quality sushi ingredients are selected for you by the Sushi Chef who takes your food preferences into consideration.  The selection made for you might include Chirashi, the Chef’s selection of cubed sashimi with tamago, cucumber, ikura and uni.  Served with ponzu sauce on the side – a culinary gem among many other possibilities.  Considering “special preferences, a customer might go for a Negitoro Tartare & Kaluga Caviar Handroll or request shaved truffles as an extra.
Freshness is key at Kissaki. The fish is flown in to JFK multiple times a week and transported to the restaurants by Kissaki drivers.

This approach to custom meals readied for delivery was perfected at Kissaki during the most restrictive months of the Covid Pandemic.   And, it has caught on.  The individual pieces of delicious sushi are artfully constructed with finesse by the Chef as in accordance with Japanese tradition.  Also, alert to the need for quick preparation for delivery and an affinity for innovation, brings robots to the kitchen for spreading rice on the nori seaweed  sheets for rolling.

Garry is a design guy who cares deeply about the power of gorgeous design whether it’s applied in the field of effective digital marketing where he’s developed a career as Founder and President of Big Drop Inc., or as restaurateur of the growing up scale Kissaki brand.

Born in Tashkent, Uzbekistan, Garry came with his large, extended family, the US in 1987.  They all settled in Midwood, Brooklyn where Garry graduated from James Madison High School, like many high achievers before him.  He went onto Kingsborough Community College and Pace University.  He  launched his digital design firm in 2013. It now has partnered with start-ups, SMB’s, and Fortune 500 companies like Samsung, CitiBank and Norwall.

The first Kissaki opened in NoHo in January 2020.  Garry launched Kissaki at 286 Columbus Avenue in September, 2020.  The importance of design in attracting customers was immediately apparent with the distinctive design of the restaurant’s black temporary shelter with its big round cutout windows. In the evening, enticing lighting glows from inside the space.

Now, that more inside dining is possible, the most up-to-the-minute news is that Kissaki is expanding the restaurant at 286 Columbus Avenue to include the space previously occupied by an optical store next door.  In addition to Kissaki restaurants of the UWS, LES and Miami, other locations are in LIC and Greenwich, Connecticut.

The expanded location will allow for the construction of  an ample chef’s table as an extension of a sushi bar.  Customers can look forward to the experience of sitting before the Sushi Chef as exceptional preparations are created for them.  Naturally, as this is one of Garry’s business ventures, the aesthetics of the interior design is part of the dining experience.  These interiors feature Zari Shoji, a Japanese style of woodwork using slats that Garry describes as “an art”.