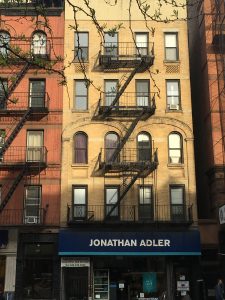 304 Columbus is notably plain.  There’s no sign of tremendous creativity housed within. But often it’s astonishing what happens beneath the surface of things. In this case, what happens within these brick walls is exceptional.  More specifically, in a studio apartment here: architect Gabriel Piedrahita has lived here with his wife Betsy for more than 20 years.  He’s also worked out of the small studio that also serves as his office.  His website portfolio shows images of Gabriel’s own designs and collaborative efforts that have produced grand, dramatic, and often elaborately conceived spaces for restaurants, casinos and hotels.

Beyond the designs for the hospitality industry Gabriel has also worked with teams on the Oculus and Terminal 8 at JFK as well as on projects such as the East Side Access that’s related to Grand Central Terminal.  His portfolio also includes the renovation of a Greenwich Village townhouse that listed at $32 Million.  His work has taken him to Guyana, Colombia, Moscow and China.  He turned down an opportunity to work in Hong Kong.  “How could I go there?  My wife Betsy has a good job at the Council on Foreign Relations here.  We have our apartment, a house in the country and two cats.”

After opening Volarch, his own firm about ten years ago, he’s never looked back on leaving the anonymity of team work on megaprojects, always valuing the freedom he has to design and consult on smaller, more personal jobs.

Gabriel talks about Betsy all the time.  The couple clearly have found love and friendship together. They inspire each other and also have fun.  Gabriel sees his life as an ongoing immigrant story in which he grasps work opportunities as they arrive, enjoys the experience to its fullest and then moves on if he doesn’t feel appreciated or the work is not challenging.

Born in Colombia, Gabriel studied architecture for a year in Colombia and then went to Argentina where he completed his undergraduate and graduate studies.  He worked for a while for the building department in Medellín, Colombia’s second largest city, but found the work unsatisfying.  Making his way to stay with an aunt in a suburban town in Florida, Gabriel set his sights on the adventures he might find in New York.  His aunt purchased him a Greyhound ticket suggesting he might find a place that captured his imagination along the way.  This didn’t happen.  However, he did fall in love with NYC the minute he arrived at Port Authority despite, (to save the least) the terminal’s shabbiness.  With no English at all, $100 in his pocket and a bag of M&M’s he went to live in a room provided by a friend of a friend in Queens.

“Someone told me they were hiring on Columbus Avenue.  I didn’t even know what Columbus Avenue was.”  But, he hopped on the #7 Subway, found his way to Columbus and was hired on the spot as an assistant at a frame shop then located at the Northeast corner of Columbus Avenue where HSBC used to be.  The space is now vacant.  While working at the frame shop, Gabriel first set eyes in Betsy when she walked in to browse postcards.  “She was 6’ tall and blond….” Betsy’s father was Norwegian and her mother was Colombian.  She spoke Spanish fluently.  She did not take up Gabriel’s offer to come back to the store although he offered her all available discounts.  He hoped for weeks he would run into her…until one day it happened.  They became friends, fell in love, married and still live in the studio apartment Betsy had first rented when she moved to New York from California years before she and Gabriel met.

Much as Gabriel loves the city, he also is enthralled with the mountains and Catskills countryside.  Convincing Betsy that country did not have to mean suburbia, the couple bought land in the upstate New York village of Tannersville.  The beautiful house he designed for them is very light, spacious.  It’s invitingly comfortable for indoor living and settling out on the deck.  This project has led to other residential commissions in the area.

Hiking, skiing and gardening—and access to high speed Internet for virtual communications—are all part of this way of living for which the couple were grateful during the most restrictive months of the Covid period.  Now, they are beginning to pick up their pre-Covid routine of splitting time between country and city.