One of the Last, Fast Disappearing Appetizing Shops 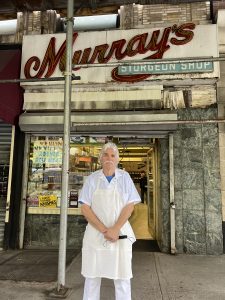 Seeking a mid-century venue with traditional foods that have made a subtle transitional nod to accommodate the contemporary palate, look no further; Murray’s Sturgeon Shop at 2429 Broadway offers the quintessential New York experience.

“I’m the third Murray and longest-serving Murray,” quips store owner Ira Goller. He explains that the first Murray Bernstein opened the shop in 1946. A second owner, Artie Cutler took over in 1974. Then, 32 years ago, Goller became the owner of Murray’s.

How did he get into the appetizing business? Goller explains that after earning a BA at Queens College, an MBA in economics at Baruch, and MS in accounting at St. John’s University in Queens, he entered the world of Wall Street working for a number of prestigious firms. He specialized in precious metals analysis, gold, and silver.

In the early 1990s, the financial world was in turmoil and Goller was looking for an occupation over which he would have more control. Murray’s Surgeon Shop had an established reputation and customer base. The decision to purchase the business has proven to be the right match for Goller’s entrepreneurial skills and ability to retain the vintage flavor of the shop while adapting the menu in response to customers’ requests. “We make ourselves relevant,” Goller says. Among the changes he has made: white fish salad is chunkier than it once was, people want to taste the fish. And, then kasha varnishkes, a mix of kasha and bow tie pasta, once popular has been dropped. 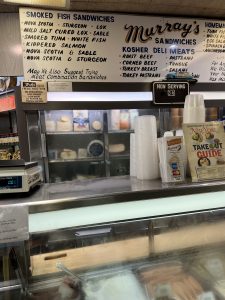 Menu Board and Counter at Murray’s

For those unfamiliar with the rules regarding the sale of kosher foods, Goller clarifies that meats and dairy may be sold in the same shop as long as the foods are kept apart and the meat slicing machine is only used for that purpose. Originally, only smoked fish of many kinds was sold along with salads. As customers came in requesting kosher meats too, Goller has adapted the placement of foods so that they comply with kosher requirements.

When the shop originally opened, mostly salty belly lox was sold. “There was no gravlax then. Today smoked fish, in general, are less salty”. Goller has long offered a selection of quality caviars in addition to pickled specialties including pickled herring, schmaltz herring, matjes herring, and pickled lox. Regarding everyday fare which may have a strong nostalgic tie, many New Yorkers are pleased to find such good homemade knishes that come stuffed with fillings like spinach, kasha, potato, sweet potato, broccoli and cheddar. Soups from chicken noodles and Matzo ball (the most popular), are among some of the other foods Goller has introduced over the years. “We sell a lot of potatoes leek, split pea and borscht.”

Old New York favorites that are rarely seen anymore, are the baked apples still sold at Murray’s. Goller says he got the recipe from a children’s cookbook. Longing for a vegetarian version of chopped liver, Goller has been making this option for the past 30 years. It’s from his wife’s mother’s recipe from Galacia and contains string beans, sweet peas, walnuts, onions, salt and pepper.

These wonderfully prepared traditional Jewish foods were part of what many Upper West Siders considered essentials for Friday night Sabbath meals, family celebrations. Many still do. And, there are plenty of testimonials in print and online praising the quality of Murray’s.

It’s also a place to go and absorb the 1950’s aesthetic of the shop. “Nothing has been changed,” says Goller.  Take note of the mirrored and tiled walls, the neon sign above the store entrance, the scale, and the boards with sandwich options hung above the counter. The clock on the back wall is all mid-century in its triangular motif and the vintage device indicating a customer’s place in line is still intact and in use. The terrazzo floors are clean, and maintained as they would have been more than 50 years ago. All this and one notable challenge: scaffolding has shadowed Murray’s storefront for the past 20 years. Not to be discouraged, you’ll have no trouble finding your way to a well-stuffed cream cheese and smoked salmon sandwich!