Oui! You may become a regular 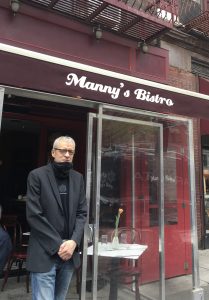 When Manny Colon took over the French restaurant (Bistro Cassis) at 225 Columbus Avenue where he had worked as General Manager for 17 years, he considered giving it a new French name.  ‘But, my friends and longtime customers from the neighborhood said ‘No. We always say we’re going to Manny’s place.  Call it Manny’s Bistro.'”  That’s how this very French spot got its name, Manny explains.

Manny, is originally from Bay Ridge, Brooklyn, where his Mom and Dad had bar restaurants. He is a self-described workaholic. He lives above the bistro and says he’s always there.  Nadine Roberts is a longtime server at the restaurant.

Nadine was born near Orléans, in France’s Loire Valley, where her mother managed a bar-tabac.  As a young woman, she completed a specialized two-year École hôtelière (hospitality school) training program in bartending and all front-of-the-house responsibilities. Arriving in New York almost 30 years ago as a tourist, she met her future husband and stayed in the city.  She started working at the Bistro the same year Manny began. Early on, she fell in love with the Upper West Side and although she’s moved from West 75th Street to Hamilton Heights, in addition to working at Manny’s, she does all her errands and shopping close by.  She’s always kept her French accent and longs to go for a visit to France that’s been delayed by the pandemic.

The menu is all French including such traditional favorites, sole meunière, and “hands down the best onion soup” says Manny, noting, our food is made with “very fresh ingredients and cooked with love”.  The desserts are classic delights like tarte tatin, crème brûlée and mousse au chocolat.  You may luck out with a special like île flottante (floating islands) or a soufflé.

The Bistro’s menu was initially limited due to pandemic-related restrictions on allowable numbers of customers, but will soon be expanding.  The excellence of the food and wine along with the extremely warm, friendly atmosphere seems to keep regulars coming in.  Manny took over ownership in September 2020 and has created an atmosphere that is all about comfort and coziness with a Gallic flair.

Manny’s staff is very international. Chef Marcos, who trained with and worked alongside several seasoned French chefs, is from Guerrero, Mexico. William Santos, from Rio de Janeiro, Brazil, has been a server with Manny since “the beginning, when we worked in a restaurant in the UES.” Abad Garcia from Guerrero, Mexico, is one of the restaurant’s food runners. “He brings the food on the table and keeps an eye on everything.”  All are extremely loyal and clearly feel appreciated and are supportive of Manny’s efforts.

Numerous writers, actors, musicians and others in the arts gravitate toward this bistro, alone or with friends and family.  “People seem to leave them alone,” Manny says. Definitely, he’s impressed by two regulars, one French, the other Iranian, who come separately almost every night.  The Frenchman has confided, “I come here every night except when my children invite me.”

During down times, Cheryl Lu-Lien Tan, Manny’s girlfriend, regularly finds a place to sit on a banquette by a table. Considering this, she quips, “This is my writing studio.”  The restaurant is located just a few blocks up from her apartment on Columbus Avenue. Cheryl is from Singapore. Her first novel, Sarong Party Girls, was published in 2016. Her recently completed anthology Anonymous Sex is set to be published by Scribner in February 2022.

Coming up this spring is a great creative francophone event.  Manny is hosting the first of what may be a series of “pop up chefs”.  It happens that his friend, photographer Frank Stewart, known for his images of jazz greats like Wynton Marsalis and Dizzy Gillespie, is also a terrific Creole Chef and will be guest-cheffing at Manny’s Bistro for dinner on May 13.  Gumbo anyone?