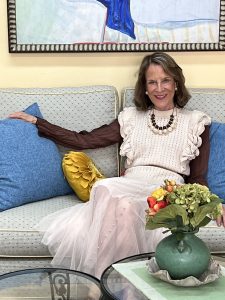 Meredith Bernstein’s literary agency office is filled with natural light and looks out to the ornate detailing of the Ansonia and the traffic on Broadway. She’s deliberately decorated the space to have a Parisian flair. Paintings hang on the walls and whimsical artistic finds are displayed on shelves. The seating is comfortable, and the mood is relaxed and inviting. Meredith is straightforward in describing her career and the important events that happened by chance or by recognition of an opportunity.

Having grown up in the suburbs and graduated from the University of Rochester, Meredith says, “I came to New York to find a glamorous job.” She had thought she might find something in advertising or public relations. But, what emerged by happenstance was that “a guy who lived across the street from me worked as a slush reader for Warner Paperback Library (now Hachette) and he suggested I might want his job as he was moving up. Meredith took up his suggestion and then she also began reading slush for a variety of other publishers. That led to a job as a “story editor” for an East Coast film producer. In the course of that job, one courts literary agents and sub-rights people for manuscripts that have not yet been published. While on that job she called an agent for his material and his gal Friday said she was getting married and did she want her job. The answer was “yes”. Shortly thereafter, Meredith attended a writers’ conference and connected with one of the attendees…she read her book on the train home and sold that book overnight! That was the old days…

In time, Meredith’s confidence grew in terms of agent-ing and she was also able to come up with ideas to suggest to writers to develop in order to become books she would sell. After five years with the Henry Morrison Agency, she left to open her own firm. For the first 15 years, it was located in the Apple Bank building, and after those upper floors became condos, 15 years ago, she moved across the street to the Rutger’s Building.

A long-time Upper West Sider, Meredith has called her apartment on Riverside Drive home. She has been married twice and has no children.

What were early successes that convinced her that being a literary agent was the right path?

Interested in journaling…(Meredith kept her own journal from ages 12 to 28) and having sold that first book–also about journaling–she was more than honored to have the opportunity later in her career to meet Miep Gies, the woman who hid Anne Frank’s diary. That involved a trip to Amsterdam and a pre-emptive bid to Simon & Schuster. Anne Frank Remembered is still in print.

Meredith has been involved in a variety of collaborations based on her ideas. These included a book on sexual chemistry which she co-authored with Julius Fast that involved them in a ten-city promotional tour and television appearances and radio interviews. She was also involved with a fellow agent in developing two series of romances that Avon Books published. Her idea for a series based on a vampire finishing school became a number 1 bestseller in the young adult category. The House of Night is still flourishing.

Meredith’s website outlines what she’s looking for in terms of the authors she wants to represent. Basically, after receiving a query letter she likes, she will request 75 pages of content along with an indication of the book’s length. If interested in reading more, Meredith will request the entire book. If all goes well with that, she will sign the client to her list.

Covid restrictions have played havoc with travel plans, but Meredith, a world traveler, has a trip to Patagonia on the horizon.