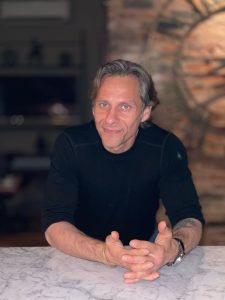 The 11th restaurant and in a sense the newest baby of the Chater family, has been welcomed with open arms by Upper West Siders, says Galal Chater.  He is one of four brothers who opened their UWS Mamoun’s Falafel shop, at 508 Columbus Avenue, in late April, 2021.

“We’ve been amazed by the reception…the friendliness and politeness of the Upper West Siders.”  In fact, the enthusiasm for the opening has been more than for other store openings in recent years.  Mamoun’s has two other locations (below 14th Street in Manhattan), as well as stores in New Jersey, Connecticut, Pennsylvania and Georgia.  “We received a lot of love from the UWS,” says Galal, “And we are extremely grateful for the neighborhood support and enthusiasm.”

At the May 11th 50th Anniversary celebrations held at the UWS Mamoun’s, the line of customers went around the block.  The “special” offering that day was to buy one falafel, get a second of the same kind for 75 cents, the price for a falafel when Galal’s father, Mamoun Chater opened his first store in 1971.

Mamoun left Damascus, Syria as a young man.  He traveled to Madrid, Spain where he met Maria his future wife.  The couple moved to New York “to find the American dream.”  They rented an apartment in Greenwich Village where they raised their four sons and one daughter, until moving to New Jersey and regularly commuting into the city.  Mamoun also took a lease on a small empty store at 119 MacDougal Street.

The time was right for a falafel restaurant.  Its exotic character and flavor appealed to the village crowd of artists, writers, musicians and other creatives. Galal says it also drew the artists and musicians who appreciated something different and unique, along with Israelis and Middle Eastern Arabs who were drawn to familiar favorites.

The shop’s kitchen was miniscule.  Galal and his brothers all have memories of running down the street from their apartment to the restaurant carrying a pan of freshly baked baklava, which few wanted to miss.  Mamoun passed away six years ago.  Maria now lives in Spain.

Has the menu changed over time?  Galal answers, it has expanded, but really not much.  The emphasis has always been on serving delicious food that’s fresh and well prepared.  “Whatever we do, we do meticulously,” says Galal. Mainstays are falafel, hummus and shawarma, baba ganoush and shish kebab.  Chicken kabab and shawarma were added in the early 1990’s.

Galal said it’s impossible to have a business in New York for 50 years and not be influenced in some ways by Westerner’s preferences.  However, he says, “When I first went to Damascus, I was struck by all the small specialized stores, falafel in one place, shawarma in another.  A place where you could get tea and pastry.  We’ve tried to keep that small specialized feeling.”

Is the plan to open even more Mamoun’s?  Galal says, yes, they’d like to grow the business but only after each store is fully self-sufficient, which takes time: “It’s like with a baby.  A store needs all your attention at first. After the initial work has been put in, it can sustain itself with less supervision.”