Advancing with a Competitive Edge 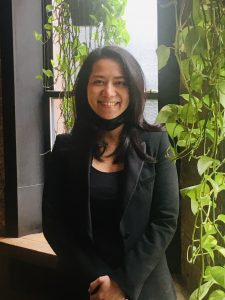 There’s no question that Silvya Silvany sets goals for herself and achieves them.  She’s also open to adjusting and expanding her dreams and plans and taking on the education needed to achieve them as her experience sets her view on new opportunities.

Currently Silvya is the manager of Flame, a restaurant located at the north end of the Endicott which stretches between 81st and 82nd Streets on the westside of Columbus Avenue.  Flame specializes in hibachi and sushi.  Asian Fusion is also a menu highlight.  Asian Fusion, Silvya explains, involves preparing traditional Asian dishes with spices modified to appeal to American tastes.  She started working at Flame four years ago as cashier and member of the wait staff and has been manager for the past two years.  She talks enthusiastically about the drama and tastiness of hibachi.  “With hibachi you have a show (tossing eggs and swirling flames) and you’re also full at the end.”  She’s also a big fan of the dim sum dumplings that are made fresh every morning.  What are her favorite items on the menu?  What would she recommend?  Silvya responds enthusiastically, she’d suggest a three-visit introduction to Flame.  “On the first visit, I’d suggest the dim sum; on the second, I’d have the Special Ocean Roll and Flame Roll.  Delicious!  On the third visit to the restaurant, she’d have hibachi.  Then the customer could return with some idea of the range of the menu which also includes sea bass, scallops, shrimp and lobster and a wide variety of steaks including 35-day aged ribeye.

Silvya is from Bogar near Jakarta, Indonesia.  Her parents work for the government’s Forestry Department.  She completed her diploma for the hospitality industry in Indonesia.  She then secured a seasonal job at a hotel in Miami, Florida which had a relationship with her school and sponsored her travel and employment in the US.  A big plus in the ease of her move to the US was that Silvya spoke English, having learned it at school beginning in the third grade.

After three years in Florida, having become a permanent US resident, Silvya moved North to New York City, living in Queens.  “I wanted to spread my wings to bigger opportunities and continue my study beyond the field of hospitality.”

While working at Flame, she earned a BA in Forensic Psychology at CUNY’s John Jay College.  Now she’s turned to a different specialization, Industrial Organization (IO) psychology, one aligned with Human Resources.  She has bene accepted into Touro University Master’s Degree in IO beginning May 2021.  The same month she is also starting a Harvard University certificate program in business administration.  All this while continuing to work at the restaurant.  Silvya says she knows her education and future career goals may continue to evolve, but she is seizing the chance to broaden her education.  “There are good opportunities for immigrants now.  I don’t want to lose the competitive edge.”