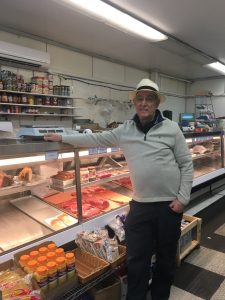 Fischer Bros. & Leslie Kosher Butcher & Poultry at 230 West 72nd Street has seen the ups and downs of the Upper West Side. It has also stayed strong over the 72 years since it was opened 1949 by Morris and Louis Fischer.  Leslie (Lutzi) Niederman, a holocaust survivor, was a friend of the Fischer brothers. He began working for them to learn the business.  He was so good and so popular with the customers that he was offered a partnership in 1952.

True to the commitment to custom butcher services, the business has adapted its offerings somewhat to accommodate increased demand for prepared foods.  But, custom service defines this longtime business and its many customers, among them second and third generation regulars, know it.

Paul Whitman is the current owner and manager of the store.  He had earned a degree in biochemistry and an MBA.  He was working in marketing for a pharmaceutical company, but he changed his professional direction after marrying Marcy Neiderman, “the butcher’s daughter,” in the early 1980s.  “My father-in-law made me an offer I couldn’t refuse,” says Whitman, who was also close to Steve, his brother-in-law, and a member of the business team.

The older partners have now passed away or retired.  Today, Whitman, who once wielded a butcher’s knife with finesse, mostly oversees a staff of a dozen butchers and manages administration of the shop whose leadership includes two former senior employees who joined as partners.

What is a custom butcher?
Whitman explains that customers have very specific preferences most of which are discussed when orders are taken over the phone or by email.  Ordering online just doesn’t catch the subtleties.  So while this format was tried, it was let go some time ago.  Many customers maintain ongoing  accounts.  Orders of a full range of kosher provisions including prime beef, veal, lamb and fresh poultry are picked up at the store and many go out, one to three or four times a week, to customers’ homes by bike delivery.  Examples of custom orders are varied and precise.  Whitman explains, for example, that the shop’s outstanding prime rib may be cut to specified thickness.  “Sone people like it cut 2” thick. Some like the fat on, others prefer the fat partially or totally removed.  And, there are different ways of wrapping. Our wholesalers know to send us only quality or we’ll send it back.”

Accolades for this business go way back, but are not forgotten.  “In 1999, New York Magazine proclaimed the rotisserie chicken at  Fischer Bros. & Leslie was ‘The best in the city,'”‘ says Whitman.  And, the butcher shop was noted as, “The only good kosher place,” by Florence Fabricant in a 2005 story on the UWS in the NY Times.

Whitman recalls the launch into prepared foods as a bit of family lore.  Originally the store opened on the North side of 72nd Street.  It moved to its present address some years later.  At first the space was shared by a fruit and vegetable business (Eli’s).  After Eli’s left, that area was used for preparing rotisserie chickens which also provided the makings for chicken soup.  The building is owned by Whitman’s family.  He and his wife once lived above the store. Once, when Marcy wasn’t feeling great, a container of chicken soup was brought up from the store. That this traditional remedy for all that ails was so delicious, sparked the idea to enhance the back of the store into a commercial kitchen and go full force into prepared foods. This part of the business now accounts for 40 percent of sales.

Whitman does occasionally pick up a butcher’s knife.  His workers who may not know he once worked behind the counter take note. “They’re surprised I can handle that knife with great skill.” But, he admits, “These days I’m not faster than anyone.”